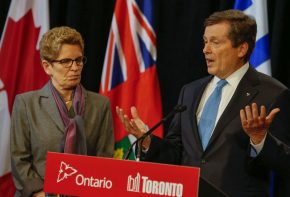 John Tory is calling into question a $700,000 cut by the provincial Liberals of an annual grant to the Toronto Public Library which was originally pegged for a virtual reference library.

Mayor Tory says you can’t take $700,000 out of a library budget and not have an impact.

Tourism and Culture Minister Eleanor McMahon defended the cut in the legislature yesterday by saying “We reviewed this cost in the ongoing program Mr. Speaker, and it was found to be not nearly as effective, in fact some of the monies remain unspent.”

Mayor Tory told Zoomer Radio’s Fight Back with Libby Znaimer, he thinks Premier Wynne is being misled by staff, with regard to a decision not to include new funding for social housing repairs in the recent budget.

“And I think if she wasn’t under the spell of some bureaucrats who told her we couldn’t do this, that she would just pick up the phone and say, look it’s the right thing to do to help with some funds for the social housing repairs, and I think that’s what she’s do and I think she will one day, I just hope it’s soon,” Mayor Tory explained.

Tory also said that he hopes Toronto’s Liberal MPPs are as persuasive in lobbying for social housing funding, as 905 MPPs were when it came to lobbying against road tolls for the Don Valley Parkway and Gardiner Expressway.