EXPLOSIONS AND THICK SMOKE FROM HYDRO FIRE IN FINANCIAL DISTRICT

A busy intersection in Toronto’s financial district has been shut down as police investigate a series of blasts and heavy smoke billowing up from underground – caused by a hydro vault fire. 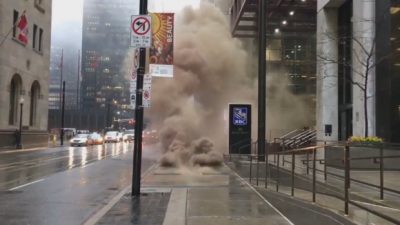 It began around 5pm during evening rush hour and led to police herding crowds of commuters away from the scene – near King and Yonge.

Toronto Fire platoon chief Kevin Shaw said crews are waiting for Toronto Hydro to assess the situation before any further action is taken – and he says that smoke from an electrical fire is dangerous and the public should definately avoid the area.

The building at 20 King west was evacuated as a precaution.
Toronto police say no injuries have been reported – and it’s unclear how long this investigation will take .