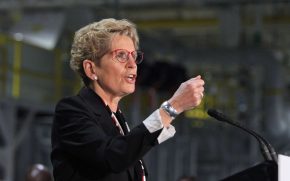 (The Canadian Press / Dave Chidley)
Kathleen Wynne calls it a step toward truly universal coverage and says she’d like to see a national pharmacare program
She’s certain other premiers will have questions for her at their next meeting this summer.

Health Minister Eric Hoskins says the approach on pharmacare is similar to Ontario’s push for pension reform, which saw the province use its own proposed pension plan to successfully push for enhancement of the Canada Pension Plan.

Hoskins points out some of his provincial and territorial colleagues are concerned about up-front costs, but hopes Ontario’s pharmacare plan can show there’ll be cost savings through bulk purchasing and keeping people healthy.

Mihevc, chair of the Board of Health, hopes it’s a step toward ensuring pharmacare will be available to all Ontarians in the future.