RAPTORS TO FACE THE CAVS IN ROUND TWO

The Toronto Raptors are headed to the Eastern Conference semifinals against the Cleveland Cavaliers, the team that ousted them in last year’s NBA semis. 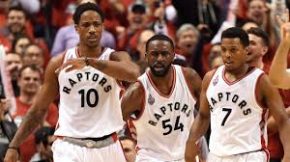 DeMar DeRozan scored 32 points as the Raptors held on to beat the Bucks 92-89 lst night in Milwaukee.  The win clinched the best-of-seven series in six games.

The Raptors had never won a playoff series in less than the maximum seven games.

The open the Eastern semi-final in Cleveland Monday night.