Hours after Donald Trump claimed Canada has long “outsmarted” the U.S. and will do so no more, the U.S. President spoke on the phone with Prime Minister Justin Trudeau. 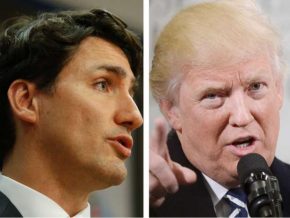 The call came after the U.S. announced a new tariff on Canadian softwood lumber, what many see as the beginning of a challenging renegotiation of the North American Free Trade Agreement.

The White House says the call between Trump and Trudeau was very amicable. A statement from the Prime Minister’s Office says Trudeau “refuted the baseless allegations” by the U.S. Commerce Department about Canadian lumber, and conveyed that Canada would continue to defend its interests when it comes to milk products.

Marvin Ryder is a professor at McMaster University’s Degroote School of Business. He told Zoomer Radio’s Fight Back with Libby Znaimer, Trump is trying to look tough, similar to what he did earlier this month by firing missiles into Syria.

“Here I am firing another salvo, not a physical salvo but an economic salvo, at Canada, and I think he’s trying to do that because his 100 days ends on Saturday,” Ryder explained.

Today, U.S. President Trump is set to unveil the broad outlines of his planned tax overhaul today, that some say would reduce the top corporate tax rate from 35 percent to 15.