It’s a video that’s gone viral, showing a passenger being forcibly removed from a United Airlines flight that was said to have too many people on board. 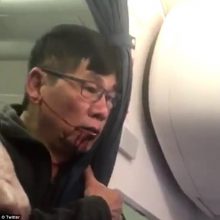 One of the law enforcement officers who was involved in dragging the man off the plane on Sunday night in Chicago has been placed on leave.

A statement from the Chicago Department of Aviation says the officer’s actions were not in accordance with standard operating procedures.

United Airlines claims the incident stemmed from a need to transport crew, after initially saying the flight was overbooked.

Zoomer Radio’s Fight Back with Libby Znaimer recently featured the story of a Toronto woman who was bumped from her Air Canada flight to Miami, causing her to miss a cruise. Victoria Russell said she was asked by the agent in the departures lounge to provide proof that she had actually paid for the flight, which she had.

“The agent I think couldn’t have been more rude,” Russell explained, “I’m a senior. I was travelling on my own. She told me to get away from the desk, away from her about 15 metres, she raised her voice.”

New Canadian legislation is expected this spring that will address the problem of travellers being bumped from flights.

A spokesperson for Transport Minister Marc Garneau says bumping rules will be included in an air passenger bill of rights that was promised last fall.

Listen for more on this hot button topic on Zoomer Radio’s Fight Back today at 12:30.