Brian Mulroney’s friendly relationship with U.S. President Donald Trump continues to be tapped by the Trudeau Liberals to Canada’s advantage.

The 78 year old former prime minister will be in Ottawa today to brief members of the Trudeau government’s cabinet committee on Canada-U.S. relations.

Mulroney has already been assisting the Trudeau government on the file, and is expected to share his perspective on upcoming North American Free Trade Agreement re-negotiations. 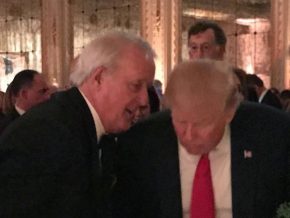 Mulroney’s home in Palm Beach, Florida is close to Trump’s Mar-a-Lago estate, and the two men have formed a friendship. In fact, Mulroney performed his favourite Irish Eyes Are Smiling at a benefit gala at Trump’s estate on February 18, 2017.

As for today’s meeting in Ottawa, Prime Minister Justin Trudeau will not be in attendance due to commitments in New York, although he has spoken with Mulroney about U.S. relations in recent months.