The man known as the “Godfather of Fusion” has passed away at the age of 73. 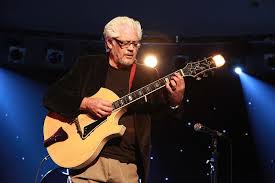 Larry Coryell died of natural causes after performing in New York on the weekend.

His eclectic career included collaborations with many of the jazz greats, including Miles Davis, Gary Burton and Chet Baker with works that often mixed jazz, classical and rock elements.

Coryell’s most noted album was 1969’s “Spaces.”  It is credited with sparking the emergence of the jazz fusion movement.