HARRISON FORD HAS ANOTHER CLOSE CALL AS A PILOT

Harrison Ford has had another incident with one of his planes.

Investigators with the U.S. Federal Aviation Administration are looking into what could have been a major incident or worse involving a private plane flown by the legendary Star Wars actor and a commercial jetliner. It is widely reported, Ford came close to putting his plane down on a runway near an American Airlines jet. Ford’s aircraft is said to have passed over the loaded passenger jet which was holding for takeoff. Ford then reportedly asked air traffic controllers; “was that airliner meant to be underneath me?” The American flight carrying 110 passengers and six crew members left for Dallas a few minutes after the incident with Ford’s aircraft. 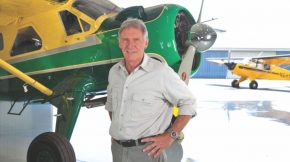 74 year old Harrison Ford collects vintage planes and has a long and solid record as a pilot. But he has had some issues before this most recent one. Two years ago, he was seriously hurt when his World War II-era trainer crashed on a Los Angeles golf course after losing power shortly after takeoff.

In 1999, Ford crash-landed a helicopter during a training flight near Los Angeles. Ford escaped injury that time.

In 2000, wind shear forced him to make an emergency landing in Nebraska. The plane’s wing tips were damaged but Ford was unhurt.