WILL THE 2018 TORONTO MAYORAL RACE BE A REPEAT OF 2014? DOUG FORD IS GOING PUBLIC WITH HIS CRITICISM OF MAYOR TORY

Toronto’s next municipal election isn’t until late next year, but the race for mayor may already be underway. 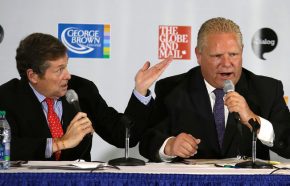 “As he stood beside me, debate after debate after debate, I will not implement road toll tax, he kept saying it over and over again. Well, you know something, John Tory is a liar,” Ford commented while at a townhall meeting Monday night hosted by City Councillor Georgio Mammoliti. Both are upset about Mayor Tory’s proposed 2 percent property tax hike.

John Tory reacted to Ford’s comments shortly afterward while on CP24 last night, saying when Ford was a councillor, he turned city council into a three ring circus.

“The governments didn’t get along, the council itself was in complete chaos, transit routes were cut, he was proposing that we should deal with our waterfront by building a giant ferris wheel down there. This is not the kind of city that I don’t think people want and he spends a lot of his time personally attacking me. And I would just say the last report that came out on him, was a report that maybe came out a couple of months ago from the integrity commissioner, and you should look it up ladies and gentlemen, it was not flattering,” Tory countered.

Mayor Tory has said he plans to run for re-election in 2018. Doug Ford has hinted at another run for Mayor but has not declared his candidacy. Maybe he will today. Doug Ford will be among the guests on Zoomer Radio’s Fight Back with Libby Znaimer between noon and 1pm.