STROKE LISTED AS OFFICIAL CAUSE OF DEBBIE REYNOLDS' DEATH

It  appeared she died of a broken heart. But officially, health experts in Los Angeles say it was a stroke that killed Debbie Reynolds. 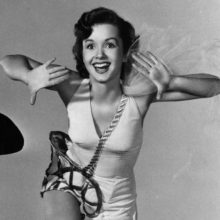 The Singin’ in the Rain co-star died December 28th at the age of 84, one day after her daughter, actor and author Carrie Fisher. succumbed to cardiac arrest at the age of 61.

The death certificate for Reynolds has now been released and the cause of death is listed as “intracerebral hemorrhage.” That’s a stroke caused by a brain bleed as opposed to the more common type of stroke, caused by a clot.
Reynolds also suffered from high blood pressure. The actresses were buried last week together at a Hollywood Hills cemetery.