As expected, Toronto-Centre MP Chrystia Freeland’s making the jump from the ministry of International Trade to Foreign Affairs as part of Tuesday’s Trudeau cabinet shuffle. 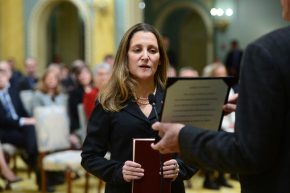 (Sean Kilpatrick / The Canadian Press)
Freeland’s replacing Stephane Dion, whose next assignment has not been made clear.
Political strategist Mike Van Soelen of Navigator told Zoomer Radio’s ”Fight Back” with Libby Znaimer that it was a necessary move as Donald Trump prepares to take over the presidency.
“You simply had to have someone in that Foreign Affairs portfolio, who could punch above his weight, punch with more effect than Stephane Dion was able to.  I think her (Freeland) fingerprints will still be all over trade.  Those departments are run out of the same building in Ottawa, so there will be a close link between the trade and foreign affairs portfolio.”
Quebec’s Francois-Philippe Champagne takes over international trade.

York South-Weston M-P Ahmed Hussen is the new Immigration and Citizenship minister, replacing John McCallum, who’s to be Canada’s next ambassador to China.

Patty Hajdu leaves Status of Women for Labour as MaryAnn Mihychuk is dropped from cabinet.