U-S President-elect Donald Trump was a target at the Golden Globes last night.

Host Jimmy Fallon noted that the Globes is “one of the few places left where America still honours the popular vote,” a jab at Trump who lost the popular vote to Democratic rival Hillary Clinton.

Hugh Laurie, in accepting his award for best supporting actor in The Night Manager, joked this could be last Golden Globes because they’re presented by the Hollywood Foreign Press, and might not survive the Trump era – a reference to Trump’s anti-foreigner “America Comes First” philosophy. 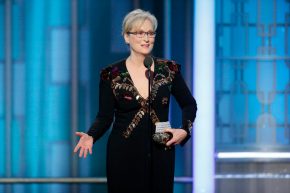 And Meryl Streep used the opportunity of accepting a lifetime achievement award to blast Trump for humiliating a physically disabled reporter during the election campaign.

“Someone he outranked in privilege, power and the capacity to fight back. It kind of broke my heart and I still can’t get it out of my head because it wasn’t in a movie, it was real life,” Streep explained.

Streep went on to say, “when the powerful use their position to bully others, we all lose.” 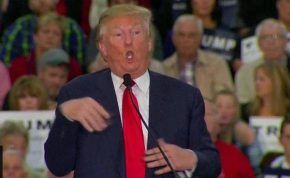 In response, Trump issued a three-part tweet this morning, saying Meryl Streep is one of the most “overrated actresses” and a “Hillary flunkee.” He goes on to say he never mocked the reporter, but showed him grovelling, when the reporter changed a 16 year old story to make Trump look bad.

Upstream Strategy Group’s Michael Diamond will have more to say today on Zoomer Radio’s Fight Back with Libby Znaimer between noon and 1pm.