A city councillor is urging the TTC to use cameras – to catch drivers who sail past open streetcar doors.

Ward 19 (Trinity-Spadina) councillor Mike Layton tweeted a call to the TTC urging the transit commission to look into the idea – which would work similar to red-light  cameras. 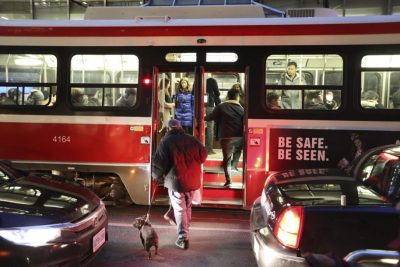 Layton sees the problem first-hand while riding the streetcar to work and says, “One of the things that is most frightening is when those doors open and you’re getting off and you don’t know if the cars have stopped.”

The cameras would snap photos of offending vehicle license plates and violators would be issued a fine of $110 and three demerit points.

Spokesperson Brad Ross of the TTC says, “It would act as a further deterrent and consequence for such dangerous behaviour.”

The TTC hopes to complete a feasibility report on the idea by the end of the year.