Former Toronto District School Board Director Chris Spence has been found guilty of professional misconduct by the Ontario College of Teachers. 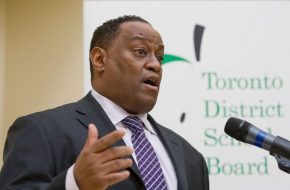 It’s been four years since the educator left his post amid accusations of plagiarism. Within months, the scandal exploded into claims he had used other people’s work in his speeches, blogs, books and doctoral thesis.

Today, a brief decision from the college’s disciplinary committee was posted on its website. The committee said in its decision, “after considering evidence and submissions presented at a hearing in October, the facts support a finding of professional misconduct.”

A written explanation for the decision will be published following a penalty hearing expected to take place in the next few months that will determine consequences Chris Spence will face.

Spence is also the focus of a tribunal at the University of Toronto, which is investigating allegations he plagiarized portions of his thesis two decades ago at U of T’s Ontario Institute for Studies in Education.