Some residents of an old neighbourhood in East York are pushing to have the homes designated as historic, despite the fact some of them are not in the best of condition. 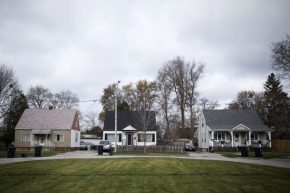 The houses are a reminder of post World War II Toronto. Many of the houses that line the streets with names such as Valor Boulevard, Warvet Crescent and Vicross Road, were built in the 1940s for veterans coming home from war. And they share many of the same features; wooden framing, a steep roof, close to the sidewalk, with a separate garage in the backyard.

Some residents are concerned that proposed developments for larger, modern homes will ruin the character of Sunshine Valley, as its known, and want the area to be designated a Heritage Conservation District. The area is a distinct departure from Toronto’s grid subdivisions where the streets are laid out diagonally. The homes were designed by architect Bruce Haken Wright.

Ward 31 Councillor Janet Davis has taken up the cause, hosting a meeting attended by residents to discuss what options they have to try to stop the development of what she calls monster homes. They’ve yet to come up with a resolution.