Donald Trump has revealed plans for his first one hundred days as U.S. President, including withdrawing from a massive Pacific Rim trade pact, cracking down on VISA abuse and easing restrictions on the development of shale energy and coal. 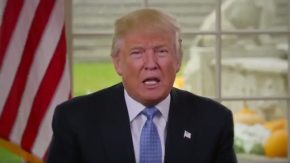 But Trump makes no mention of two of his most repeated and controversial campaign promises in a 2.5 minute video renegotiating the North American Free Trade Agreement and building a wall on the U.S.-Mexico border.

The U.S. President-Elect was also vague on who will make up the remaining members of his administration.

“Our transition team is working very smoothly, efficiently and effectively,” Trump explained, “Truly great and talented men and women, patriots indeed, are being brought in. Many will soon be a part of our government helping us to make America great again. My agenda will be based on a simple core principal, putting America first.”

Trump also says in the video he will pull the United States out of the 12 country Trans Pacific Partnership and would negotiate unspecified trade deals to bring jobs and industry back to the United States.

A CNN report says retired general James Mattis will be his defence secretary. Mattis fought in both Iraq and Afghanistan and has been critical of U.S. President Obama for being too soft on Iran, the Islamic State and the Taliban.