Two venerable Canadian actors were in the spotlight last night at a gala in Toronto. 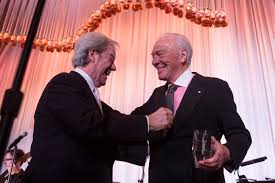 86-year old Oscar winner Christopher Plummer presented the Stratford Festival’s Legacy Award to Gordon Pinsent.  It was a reversal of roles for the two long-time friends.  It was Pinsent who presented Plummer with the festival’s first-ever Legacy award in 2011.

Pinsent, who is also 86, joined the Stratford Festival in 1962 appearing in productions of “Macbeth”, “The Taming of the Shrew” and “The Tempest.”  He and Plummer starred in the Stratford production of “Cyrano de Bergerac” which was filmed and broadcast on NBC.