After months of verbal jabs at a distance, Hillary Clinton and Donald Trump are preparing to confront each other face-to-face in the first U.S. presidential debate tonight. The democratic and republican candidates will lay out for voters their vastly different visions for the nation’s future. 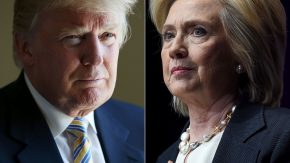 The high-stakes showdown is the first of three presidential debates. It comes as both candidates are viewed negatively by large numbers of Americans. Clinton faces questions about her trustworthiness and Trump struggles to convince many voters that he has the temperament and policy depth to be president.

“This is somewhat unfair for women candidates because there’s a lot of research that says women candidates have to prove their qualities to voters more than men candidates, says Iowa State University political scientist David Andersen, “Hillary Clinton right now is deemed unlikable by broad segments of the population.”

Clinton has debated more than 30 times at the presidential level. Tonight’s 90-minute contest will be her first presidential debate against a candidate from the opposing party.

Interest in the presidential race has been intense, and the campaigns are expecting a record-breaking audience to watch the televised debate.