A TENNIS STAR IS BORN 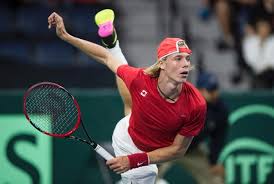 Canada won the tie 5-0 over Chile and earned a spot in the 16-team World Group in 2017. A loss would have sent Canada back to the Americas Zone Group where it hasn’t competed since 2011.

Vancouver’s Vasek Pospisil and Niagara Falls’ Frank Dancevic were victorious in singles action on Friday to give the Canadians a 2-0 in the best-of-five tie. On Saturday, Pospisil and Toronto’s Adil Shamasdin won in doubles play to seal the series win.
Neither stars Milos Raonic nor Daniel Nester were available to play for Canada.