'HILARY IS MOST QUALIFIED TO BE U.S. PRESIDENT' SAYS BRIAN MULRONEY

A former Canadian prime minister is wading into the U.S. presidential campaign.

Brian Mulroney said he knows both Democrat Hillary Clinton and Republican Donald Trump personally, but he’s not shying away from saying who would make the best president. 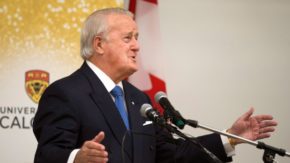 “Who’s the most qualified? Obviously because of her background, Hillary. She’s spent her whole life in public policy,” Mulroney stated following a speech Tuesday night to the University of Calgary’s law faculty.

He thinks the outcome of the election will likely turn on the first televised debate on September 26th.