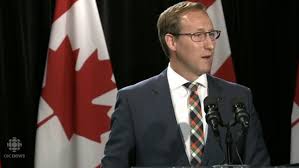 Calling it “an enormous decision,” former cabinet minister Peter MacKay says he will not run for the Conservative leadership.

The one-time Nova Scotia MP is now working as a lawyer in Toronto – and says the needs of his young family are his first priority – and it would be asking too much of them – to jump back into the arena of politics.

He and wife Nazanin have two children – Kian, aged 3, and 11-month-old Valentia.

MacKay says his decision came only after a summer of talking with friends and colleagues.