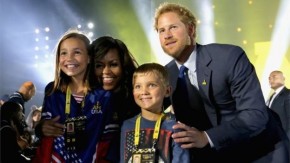 Amid the celebrity star power, the focus was on wounded former military members from 14 countries including Canada, who as athletes, are using sports to help with their rehabilitation, many after horrific injuries suffered in service to their countries.

Nearly 500 athletes will compete in the Paralympic-style sports competition over four days starting today. The Invictus Games will be in Toronto next year. Prince Harry was recently in Toronto to promote the event.