Donald Sutherland has joined the jury for this year’s Cannes Film Festival.

Sutherland is a two-time Golden Globe Award winner – who was born in Saint John, New Brunswick – and grew up in Nova Scotia. 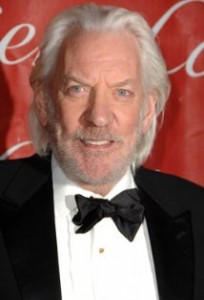 Canadians in the Cannes lineup include Quebec director Xavier Dolan, whose film  “It’s Only the End of the World” will be in competition for the prestigious Palme d’Or award.

Meanwhile, Montreal director Kim Nguyen’s film “Two Lovers and a Bear” – and “Mean Dreams” from Toronto’s Nathan Morlando will be part of the Directors’ Fortnight.

The Cannes Film Festival runs May 11th to 22nd.