ONTARIO TO FIND OUT WHO'S TO BLAME IN SCAFFOLDING COLLAPSE

Labour Minister Kevin Flynn says the province is treating a scaffolding collapse in Toronto very seriously and has its top health and safety inspectors on scene.

Investigators are trying to determine what caused the collapse yesterday at a construction site for a new public transit stop.

Seven people — including a baby — were injured.

Flynn says officials in his ministry are going to find out what was to blame in order to prevent similar accidents.

He adds the incident could have been much more devastating.

Flynn said police will secure the site at the future Forest Hill station at 876 Eglinton Ave. W., then hand it over to labour ministry officials who will investigate to determine the cause of the collapse. Investigators will gather information to determine if charges will be laid.

The province is waiting to hear from CrossLinx — the consortium doing the construction — about how it will clear the front of the site, rid the roadway of debris and get the project moving again.

Flynn said the seven injured include a worker, who got hit on the head, and a first responder. He said the injuries are serious but not life-threatening and include fractures, bumps and bruises.

Ontario Liberal MPP Mike Colle, who represents Eglinton-Lawrence, said residents can call his office to report anything about the project that they think is not safe.

Demolition work, meanwhile, has been halted temporarily at another future Eglinton Crosstown LRT station Monday after the collapse. 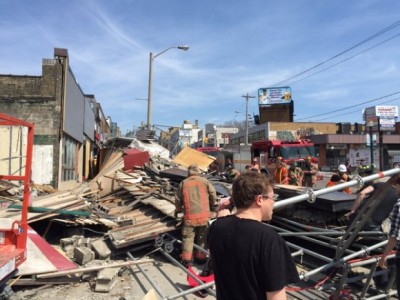