CENTENARIAN GOES SKYDIVING FOR HIS 100TH

A great-grandfather in England celebrated his 100th birthday over the weekend with a skydive from 10,000 ft. 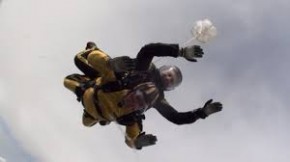 Verdun Hayes made the jump at an airfield in Devon, to raise money for the North Devon Hospice.  The centenarian, who has wanted to skydive since he was 90, says “It was first class, really beautiful.”

The daredevil – who celebrated his 100th birthday on April 6th – made the jump alongside his two great-grandsons and is believed to be the UK’s oldest skydiver.

The current Guinness World Record for the oldest tandem male parachute jump is held by Canadian Armand Gendreau, who was 101 years and three days when he made the jump in 2013.