Ontario is about to become the first province to allow self-driving vehicles to be tested on public roads. 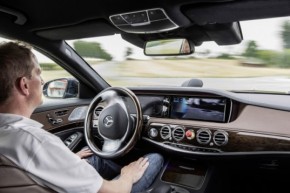 An announcement today in Waterloo is expected to confirm this news.

The Globe and Mail is reporting that testing of autonomous or self driving vehicles can begin as early as January 1st.

The plan is for Ontario to grab a share of the billions of dollars automakers, parts companies and technology giants are spending to develop cars that drive themselves.

The prospect of self-driving vehicles was believed to be decades away, but tech companies and auto makers are in a race to bring these kind of cars to market.

The Ontario plan will allow autonomous vehicles to drive on any roads, although it’s likely to be mainly on secondary high-ways and some city streets. This differs from Virginia, for example, which is establishing what it calls Virginia Automated Corridors on about 110 kilometres of highway, where autonomous vehicles can be tested in real-world conditions.