Doctor Wayne Dyer has died at the age of 75. He led the new wave of self help gurus with his 1976 best seller Your Erroneous Zones which was adopted by millions as a guide to better living.  It cataloged the ideas he’d espoused as a counseling education professor at St. John’s University in New York, and it shot to the top of the bestseller lists, where it stayed for more than a year.  Dyer became a media sensation in the U.S. and appeared on virtually every TV talk show. 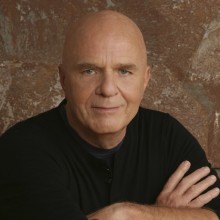 The chief executive of Dyer’s publisher, Hay House, says he died Saturday night in Maui, Hawaii. The cause of death has not been reported.  Dyer was diagnosed with chronic lymphocytic leukemia in 2009. He claimed to have treated it with positive thinking, daily exercise and psychic surgery performed remotely by a Brazilian medium. Dyer detailed the controversial treatment in a 2012 interview with Oprah Winfrey, for whom he was a friend and frequent guest for more than 30 years.