The chair of the Toronto District School Board has resigned to run in the federal election. 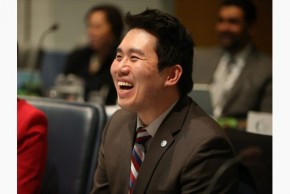 Shaun Chen hopes to become the Liberal MP for the new riding of Scarborough North.

During his tenure in the top job at Canada’s largest school board … Chen oversaw some rough times, taking over after a number of scandals and amid ongoing feuds among trustees and staff.

Chen said while he is stepping down as chair, he is also taking a leave of absence as trustee for Ward 21, (Scarborough-Rouge River), and will not accept any salary from the TDSB during this time.

It’s expected the Toronto District School Board will call a meeting next week to vote on a replacement for Chen.  The only candidate expected to run to replace him is Robin Pilkey, first elected as a trustee last fall to represent Parkdale-High Park.

The TDSB faces a tough few months. A report on the board’s future comes from Barbara Hall sometime this month and there could be labour turmoil when school resumes in September.