The excitement is building in Seussville as Random House gets set to publish a brand new book by Theodore Geisel who is better known to millions as Dr. Seuss.  The new book is called “What Pet Should I Get?”. 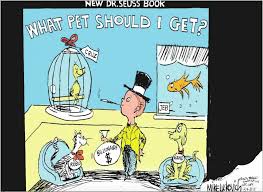 The new book is based on a manuscript that the author-illustrator’s widow had put into a box along with other texts and sketches while remodelling her home in La Jolla, Calif., shortly after his death in 1991.  Audrey Geisel didn’t realize what the manuscript was until the fall of 2013, when she and Claudia Prescott, Dr. Seuss’s longtime secretary and friend, looked through the box.  The 48-page work sees the brother-sister characters from Dr. Seuss’s 1960 book “One Fish Two Fish Red Fish Blue Fish” choosing an animal friend.  “The Office” star Rainn Wilson narrates the audiobook, which is also out on Tuesday.