It’s kind of like the family member you never knew you had.

Scientists say the Earth’s a ”little less lonely, because there’s a new kid on the block.”

They simply refer to it as Earth’s ”bigger, older cousin.” 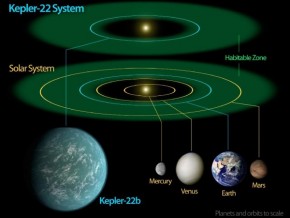 It’s the first near-Earth size planet to be found orbiting in the zone of a star similar to the sun.

That means it’s able to maintain the right temperature to support water, which is necessary to house life forms.

This newly discovered plant is larger than Earth, which also means it’s likely to have a rocky surface, and similar to Earth’s orbit, taking 385 days to circle its star.

The discovery is the latest from the Kepler Space Telescope launched in 2009.

Its mission to find habitable planets in other solar systems.