MEET THE NEXT DONOVAN BAILEY

A new Canadian Superstar in track and field announced his presence at the Pan Am Games last night.  He’s Markham’s  Andre Degrasse who won gold in the 100 metres last night in time of 10.05 seconds. 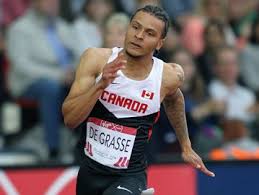 The 20-year old, is already the NCAA Champ in the US as a member of the University of Southern California track team. He’s been compared with Oakville’s Donovan Bailey who once held the world record for the 100 metres following his gold medal performance at the 1996 Olympic’s.  Bailey was also the first Canadian to legally break the 10-second barrier in the 100 metres.  Degrasse became the first Canadian to break the 10-second barrier in 15 years at the PAC 12 championships several weeks ago.  He also owns the 200 metre Canadian record.