AI WEIWEI IS FREE TO TRAVEL

For the first time in 4 years, dissident Chinese artist Ai Weiwei is free to travel. Chinese authorities have returned his passport which was confiscated in 2011 when he was detained for 81 days without charge.  The 57-year-old posted a picture of himself with his passport on Instagram. 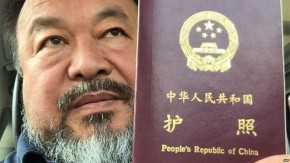 The artist says his first trip wil be to Germany, where his son has been living for the past year.  He confirmed to Reuters that although he is legally allowed to travel outside China, visiting other countries would still depend on whether they issue him visas.  Following the announcement, the England’s Royal Academy of Arts said Ai, who is an Honorary Royal Academician, would travel to London in September for a landmark solo exhibition. That show will include significant works from 1993 onwards and will also feature new site-specific installations.