CAPTAIN JOHN'S BIDS FAREWELL TO TORONTO, WILL BE SCRAPPED IN PORT COLBORNE

A landmark on the Toronto waterfront for 40 years, Captain John’s leaves our city today. 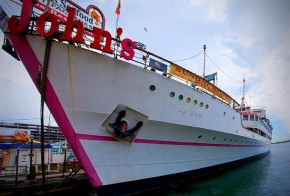 The former restaurant will be hauled away by two super tugs at about 10:30 this morning.  A police escort is planned for the tow which will take Captain John’s out of Toronto Harbour, across Lake Ontario and through the Welland Canal to the Port Colborne scrapyard where it will be chopped into recyclable pieces.  Valuables, such as the two pianos still on board, will be sold off.

Along for today’s ride will be eight crew members, including the former floating restaurant’s long time chef and “Captain”, John Letnik.

The ship has been a fixture at the foot of Yonge Street since November of 1975.