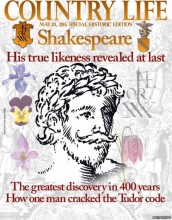 According to an British academic expert, a 400-year-old botany book contains what may be the only known portrait of Shakespeare made in his lifetime. Mark Griffiths cracked an “ingenious cipher” to identify the playwright in an engraving in the 16th-Century work. Griffiths says the Shakespeare portrait was the only known verifiable portrait of the world’s greatest writer in his lifetime.  He says the engraving shows the Bard aged 33 and in his prime.  If so, Shakespeare would have just finished “Midsummer Night’s Dream” and is about to write “Hamlet”.  Griffiths says the engraving shows Shakespeare with film star “good looks.”  This isn’t the first time claims have been made about a Shakespeare portrait. In 2009, a painting known as the Cobbe portrait was put on show by the Shakespeare Birthplace Trust in Stratford-upon-Avon. The trust said it was convinced the artwork – thought to date back to 1610 – was an authentic portrait, but just like now, some critics are saying the picture is not that of the Bard.