A late period Vincent van Gogh landscape is going on the auction block next month at Sotheby’s in New York. 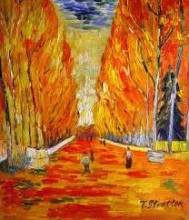 The Allee of Alyscamps, which was painted in 1888, could fetch more than $40-million.  Sotheby’s says only two works from van Gogh’s mature period, from 1888 to 1890, appeared at auction last year.  The current record for the artist was set in 1990 when a collector paid $82.5 million for van Gogh’s Portrait of Dr. Gachet.