One of New England’s most prestigious art museums is turning a portrait over to U.S. federal authorities because it was bought from a dealer accused of trafficking in stolen antiquities from India.  The Peabody Essex Museum in Salem, Massachusetts, says it will expedite the handover of a mid-19th century portrait to the Department of Homeland Security to cooperate with an ongoing international art fraud investigation into dealer Subhash Kapoor. 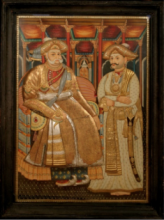 The museum acquired the portrait from Kapoor’s New York gallery in 2006. Five year’s later, Kapoor was arrested and is now awaiting trial in India. The Peabody Essex Museum says the allegations have  sent shock waves through the art community.