BLUE JAYS WIN SEASON OPENER, BLAST OFF IN THE BRONX 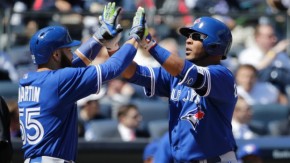 Another new face in the Toronto lineup, Devon Travis’ first hit in the majors was a solo homerun to close out the scoring.

Drew Hutchison, the youngest opening day starter in Jays’ history, allowed only three hits through six innings, including a homer by Brett Gardner.