Famous fans of Joni Mitchell are voicing their support and concern for the Canadian folk song icon while she is hospitalized in Los Angeles.

Kiss lead singer Paul Stanley tweeted a recent picture of himself and the Rock and Roll Hall of Famer, telling his followers to send her love and prayers. 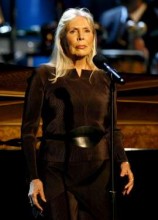 Joni Mitchell, who is 71, was found unconscious in her home Tuesday and taken to a hospital by ambulance. She was later in intensive care and undergoing tests but her twitter account said she was awake and in good spirits. There have been no more posts about her condition.