The leaders of Canada’s two largest cities had a formal meeting this morning in Toronto. 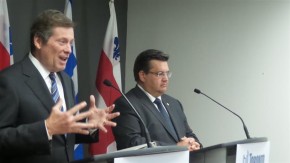 Mayor John Tory played host to his Montreal counterpart, Denis Coderre, who emerged to says the ”two solitudes are over.”

He went on to say, ”the fact we have the two major cities who are sharing some of the issues together, who are wishing to work together, this is what Canada is all about and should be.”

Tory says the two cities have not worked together enough but promises to change that.

”Building a strong Montreal and a strong Toronto is about building a strong Canada.  And that’s why we need the partnership of the federal government and we can go together as two people who’ve had different experiences and different backgrounds even politically but say, ”Look, we’re here to build a stronger Canada by having its two biggest cities be strong and be liveable.”