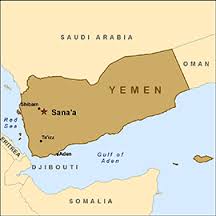 The death toll from Friday’s suicide bombings at two mosques in Yemen’s capital has risen to at least 120, with many more people injured.  Three suicide bombers attacked two mosques controlled by Shiite rebels in the Yemeni capital of Sanaa.  They are the first large-scale bombings to target mosques frequented by both Shiite and Sunni Muslims.    The attacks came a day after intense gun battles in the southern city of Aden, between rival troops loyal to Yemen’s former and current president, left 13 dead and forced closure of the city’s international airport.  Yemen is home to what is considered the world’s most dangerous and active off-shoot of al-Qaida