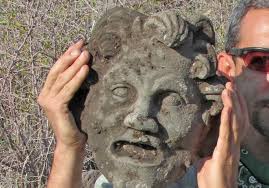 Archeologists in Israel have unearthed a large, heavy bronze mask depicting Pan the half-man, half-goat god of shepherds, music, and pleasure in Israel’s Hippos-Sussita National Park.  Haifa University archeologist Michael Eisenburg says what makes this so fascinating is that most of the known bronze masks from the Hellenistic and Roman periods are miniature, but this one is much larger.  The mask was uncovered near the remains of a thick walled basalt structure that dates to the Roman era.