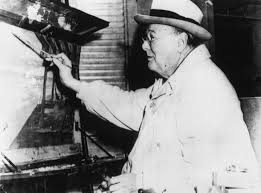 The family of Winston Churchill has donated a major collection of the war time prime minister’s paintings to pay inheritance taxes on behalf of the politicians last surviving child.   The Churchill family offered the 37 works…which are worth almost 10-million pounds…   following the death of Lady Mary Soames last year.  The British government has accepted.  All but two of the paintings, which span 1915 to the late 1950s, will remain at Chartwell, the Churchill family’s Kent home, which is open to the public.  One will remain at Westminster the other in the Churchill War Rooms.

Sir Winston produced more than 500 paintings and continued his hobby well into his 80s.  He died 50-years ago in 1965.