Harrison Ford is still in hospital after crashing his vintage plane yesterday in Los Angeles.  There are reports he underwent surgery for a couple of broken bones but he is expected to fully recover.

Soon after the legendary action movie star lifted off the ground, his single-engine plane began to have difficulty and that’s when Ford called the flight tower for permission to return.

“5-3-1-7-8 engine failure, immediate return,” Ford can be heard saying in a recorded call to the flight tower.

But he didn’t make it back to the airport. Instead he touched down at a nearby golf course. 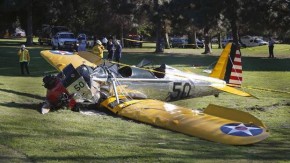 Golfer Elaine Miller, who helped pull Ford out of the plane, says he was communicating.

“He was able to speak, he expressed that he was in pain, which was no surprise.  He had a significant head wound.  He asked somebody to hold his legs up,” Miller explained.

The son of 72 year old actor, Ben Ford, tweeted last night that his Dad is battered but ok.

Harrison Ford got his pilot’s license in the late 1980s and has served as a spokesman to various airline associations.