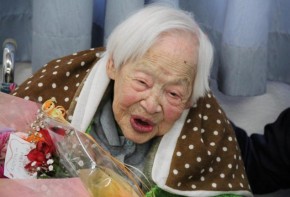 In her words, ”it seemed rather short,” but adds she’s ”very happy” to be that age.

Asked for the secret of her longevity, she says she wonders about that too.

According to officials at her Osaka nursing home, Okawa has slowed in recent months, has trouble hearing but still eats well and is in good health.

They had three children.

Japan has the most centenarians in the world – more than 58,000.