Port authorities in Newark, New Jersey have seized a painting thought to be a long lost work by Pablo Picasso. 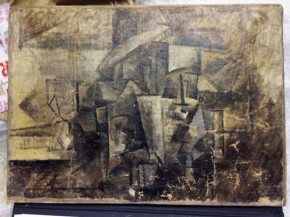 The artwork titled “La Coiffeuse” – The Hairdresser in English – was painted by the Spanish artist in 1911.  It went missing from a Paris Museum of Modern Art store room in 2001.  The oil-on-canvas was discovered on its way to a climate-controlled storage facility on Long Island, apparently Fedexed from a sender in Belgium named only as “Robert.” To avoid detection,the priceless artwork was described as a 37-dollar Christmas gift…which ironically aroused suspicion from inspectors.  La Coiffeuse was last appraised in 2001 at a value of $2.5 million.  However, the piece is believed to be worth much more now.