The Mounties have charged three Ottawa men, including one who may already be dead, with terror-related offences. 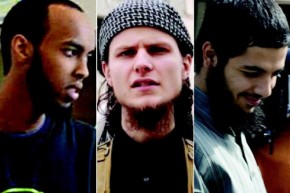 24-year old John Maguire (centre) is also charged with facilitating an activity for a terrorist group.

He appeared in a recruiting video last year urging Muslims to launch attacks against Canadians.

The RCMP acknowledge recent reports indicating Maguire has been killed in Syria, but say they have no ”conclusive evidence confirming that,” and must assume he’s alive.