The future of the English National Opera is in jeopardy after  its public funding was cut by almost a third and the departure of both its executive director and chairman within a week. 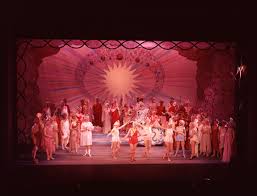 Last year Arts Council England slashed almost 5 million pounds from the ENO’s budget.  Now, Henriette Götz, who was appointed executive director last April, has quit just days after chairman Martyn Rose, following major ongoing disagreements with artistic director John Berry.   Each side appears to blame the other for the opera’s financial woes. Götz was appointed by Rose but reported to Berry and the two are said to have fallen out  almost immediately and barely spoke to one another.  The London institution has struggled to fill the biggest theatre in the West End.  Last spring the ENO moved to the 23 hundred seat Coliseum in hope of finding a cash cow to emulate the National Theatre success in a larger venue.