An arrest has been made in an attempted mugging in Toronto that’s gone viral on the web.  Toronto Police have arrested a 44 year old man at a residence on Queen Street West in connection with the attempted mugging of the owner of Barberian’s Steak House on Monday.  What’s notable about the crime is the way Arron Barberian fought back.

The 50 year old restaurateur posted two videos to YouTube of security cam footage showing him walking with a till full of money when another man approaches him from behind and tries to grab it.  The till flies into the street and after a brief tussle, Barberian throws the man to the ground.  A staff member then comes to Barberian’s aid as he grabs the mugger a second time and swings him around, hurling him onto the pavement a second time.  See the video here. 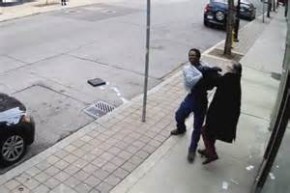 “I was a bit shocked that someone was trying to mug me,” Barberian explained afterward, “so I basically reacted quite quickly and when I realized he didn’t have a weapon in his hands, because he had my money, fives in one hand and tens in another, I just gave him that hockey sweater move, pulled it over the back of his neck and flung him around like a rag doll.” 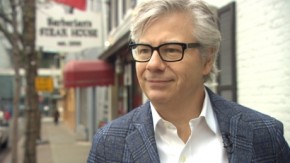 The suspect ended up giving up the fight and running off.  But there’s a second part to the story.  While the struggle was going on, Mr. Barberian’s cellphone went flying into the street.  The security footage shows a woman picking it up and leaving the scene with it.  This has prompted City Councillor Norm Kelly to issue a tweet saying, “Let’s get local businessman Arron Barberian’s phone back.”