Four and a half years after Toronto’s G20 weekend, Toronto Police Supt. David (Mark) Fenton took the stand yesterday at his own disciplinary hearing.

In breaking his silence, Fenton described the city as he had never seen it in his two decades on the Toronto Force. He called it dangerous and said the violence was seemingly contagious.

It was on the night of June 26th, 2010 that Fenton issued the first of two orders to “kettle” protesters, a controversial blockade made by officers forming a barrier around a crowd so those inside cannot leave. Many who were caught up in the kettling at Queen and Spadina for hours in a heavy downpour of rain say they were innocent bystanders and Fenton went too far.  Lucius Dechausay was among them. 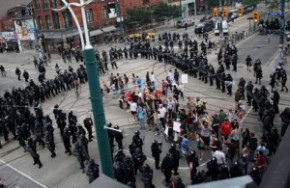 But Fenton’s lawyer Peter Brauti says you have to put the actions into perspective.

“As you could see from the evidence and hear from the evidence that’s been in the tribunal, there was mass amounts of damage,” Brauti said to reporters, “We see police cars being lit on fire, stores being smashed, police officers being attacked.  That is what Superintendent Fenton inherited when he took his post as the incident commander on that particular day.  So it’s very important that people understand the context of what he inherited.”